I have finally gotten a software developer position after three years of self and university study.

I began looking seriously earlier this year and with the help of friends and Twitter, I have gotten an apprenticeship and hope to be hired on at the end of it.

It is a remote position which means I have to keep an eye on my hours, my productivity, my sleep, and distractions.

It has only been a week but I am finding I am starting to get into a rhythm.

Here are some of the apps I am using to stay productive while working from home.

There are a few time tracking apps in the App Store. There are apps such as Hours and Toggl but none of these apps are really time card apps. These apps are geared towards freelancers tracking just hours.

I was looking for something that not only tracked hours but kept track of taxes I’d owe, my hourly rate, being able to clock in and out and manage breaks, and calculating my net and gross income at the end of the pay period.

I downloaded HoursTracker a while ago when I thought I’d freelance. Never got that chance and so I deleted off my iPhone.

I remembered I had a few time trackers and found HoursTracker. I knew it was what I was searching for.

You can use the three + in the top of the app to set up a job, and from there you can add your information, such as your hourly rate, taxes, and the like.

From the main jobs screen, you can edit your job by tapping the three button menu at the top.

From the job details screen, you can clock in and out.

HoursTracker: Breaks and Clocking In and Out from Tiffany White on Vimeo.

These are some of my favorite things about this app over others.

Freedom is a little Mac, iOS, and Windows utility that blocks distracting websites and apps.

I downloaded it for iOS a while ago and while it worked well, sometimes the VPN profile would still block access to apps like Facebook. It’s really a pseudo-block. It stops apps from refreshing but it will not stop you from seeing past updates. I uninstalled it as I am pretty good about phone access during work hours. It is mainly on my Mac, where I do my work, that is the issue.

The reason I downloaded it on my Mac was for the ability to block apps. I needed a way to stop opening my text editor and working on issues and features all night long, which isn’t healthy. I’ve blocked the apps I would use to do development, essentially quitting the app right as its launched so I never get to do anything when I am off the clock. I do this on the weekdays, as weekends I can work on side projects if I’d like.

Freedom on Mac from Tiffany White on Vimeo.

OmniFocus’s first incarnation was a hack on OmniOutliner called Kinkless. It was essentially a bunch of AppleScripts hacked together to give OO a GTD system within the app in 2006.

In 2007, The OmniGroup asked Ethan Schoonover. the creator of the AppleScripts and Merlin Mann to help them come up with a full-fledged GTD app for Mac.

The first beta of OmniFocus was released in the summer of 2007, with version 1.0 being released in 2008. Here are a couple screenshots of the app’s first UI: 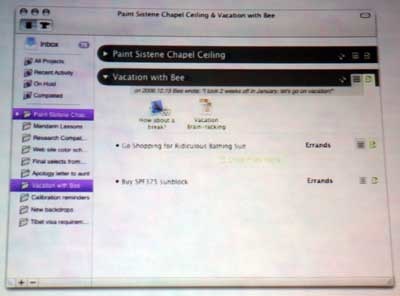 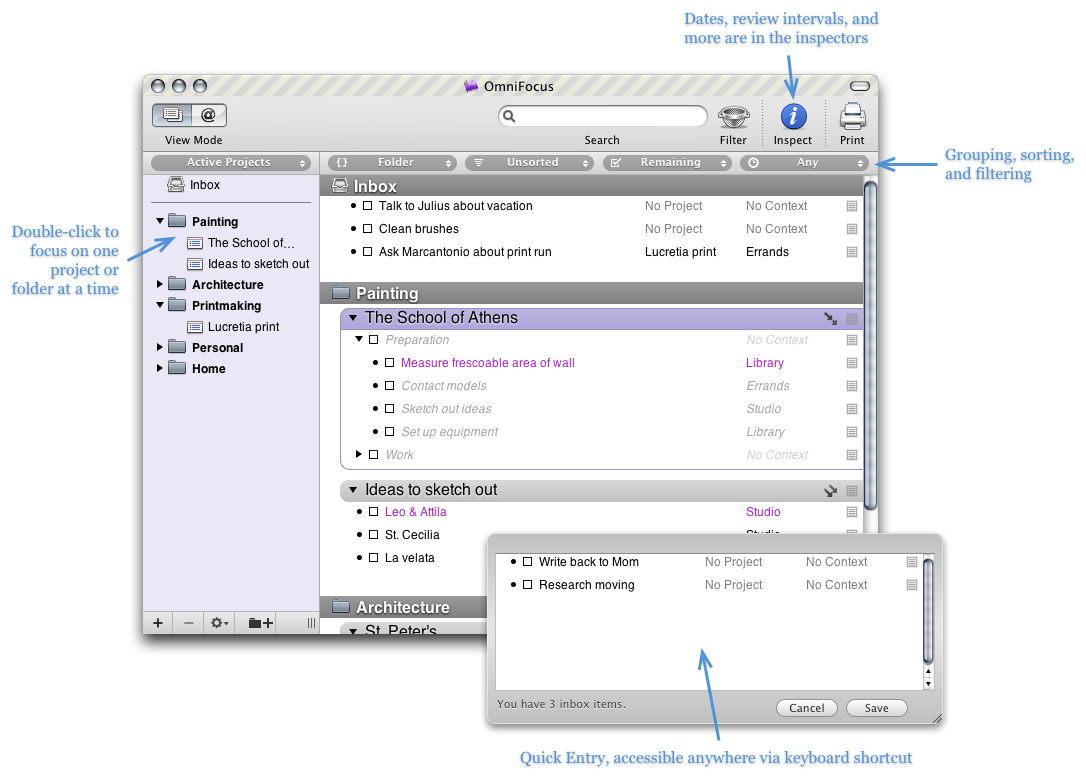 My Choice for Task Management

I’ve tried pretty much all the big task managers: Todoist, 2Do, ToodleDo, and OmniFocus. Each time I try one of these, I return to OmniFocus for its flexibility, features, perspectives, and AppleScript support .

When I first used OmniFocus, I wasn’t sure how to set up my contexts. I read all the GTD articles I could find for the best possible solution. The wisdom was to set up your contexts within the context of how you are going to perform the action. For instance, if you have a meeting at 2pm on Google Hangouts, you have to be at your Mac. You would want to use Mac or iMac or whatever as a context because that is what you’re going to use to perform the action. You could have contexts for where and action needs to performed as well.

This worked well but I was still not using it the best way I knew I could.

I discovered using energy levels as contexts and decided to give it a shot.

It’s working well for me, however I decided to add other contexts as well, such as iPhone, iPad Pro, Work, and iMac.

In my opinion, Perspectives and Defer dates are what sets OmniFocus apart from the competition. No other task managers have these two things, and if they do, they don’t implement them as powerfully as OmniFocus has.

Perspectives allow you to adjust just what you want to see at any given time. If I want to see what work tasks I have for today in a certain project, then I can create a perspective that shows me that.

Here is my Contexts by Project perspective. 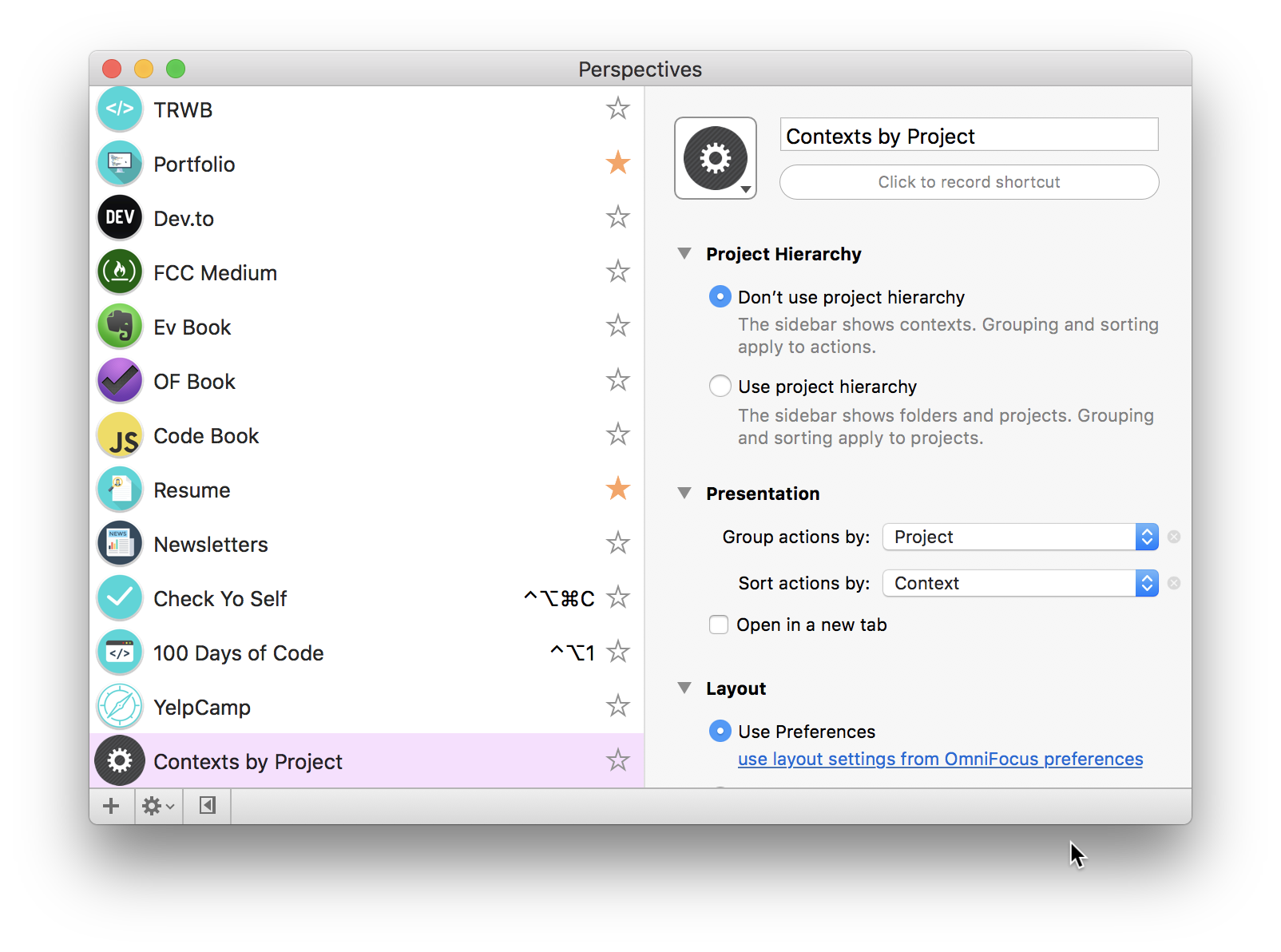 Filtering what you want to see and when is probably the most powerful way to use a task manager and OmniFocus is best in class at this.

I open OmniFocus every morning I wake up and start my day from there.

I was a long-time BusyCal user. The calendar is powerful and plenty capable, but, it’s ugly and the iOS counterpart isn’t nearly as fleshed out as Fantastical 2.

Fantastical on the Mac started as a menubar app that you could invoke with a keyboard shortcut. It found a lot of fans immediately. I was one of them. With the love it received on the Mac, it wasn’t too long before Apple fans wanted it on their iPhones and eventually, iPads.

Fantastical 2 for Mac launched in 2015. I was pretty happy with BusyCal. But as features were added and the looks became even more streamlined, I couldn’t resist. It helped that I won a license in a giveaway on YouTube. But I was going to buy it anyway.

Calendar sets allow you to show or hide sets of calendars you have set up. You can separate your work calendars from your home calendars or shared calendars. I have a set for work, home, and editorial. My shared calendar is in every set I’ve made. This is a powerful feature in Fantastical that BusyCal didn’t have.

You can use natural language processing to input your appointments and meetings. In fact, Fantastical was the first of app to do this sort of thing when it launched. You enter a name and date like you would say to someone at work and Fantastical parses your text just as if it was a conversation.

No calendar worth its salt doesn’t have calendar invites. If you are a power user, and most 3rd Party calendar users are just that, than you need this feature and Fantastical does an excellent job with this.

Along the main calendar window on the Mac, you can have another timezone available in case you are working with a team in another timezone. My team is in New York and I am in Pittsburgh so I don’t have to rely on this. If I did, I know it is rock solid.

This is one of the ways I use the pomodoro technique. I have it on my iPhone and Mac but mainly use it on my Mac as that is where I am working most of the day.

There’s not much to say about it. The Pro version gives you detailed reports and sync which is what I needed. It’s $4.99 on all platforms.

You’ve heard of it. Nerds have communities in it. But it started as an app for small teams.

We use Slack almost exclusively for communication. Even our sprints and meetings are in Slack.

I love Slack. I love the team behind Slack and their mission to make communications between small teams efficient and enjoyable.

The Tools Are Less Important than the Mindset

I am getting used to working from home but the transition from being unemployed and programming for hours on end to being employed and working on hard programming problems most of the day is a pretty seamless one.

I need to get out and get more exercise, find a co-working space, just to get out and be around people. This is important to keeping yourself physically and mentally healthy.

But yeah. The tools are nice, too.

New Keyboard from Work from Tiffany White on Vimeo.